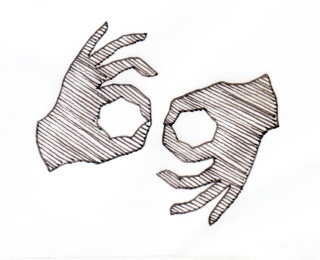 Hope for the future

A couple of weeks ago I went to a conference / festival called Future Perfect, held in tents and an old inn on a small island in the Stockholm archipelago. In these beautiful surroundings social entrepreneurs, futurists, change makers and provocateurs gathered for a couple of days to exchange ideas.

As the sun set on the second day, the last panel discussion touched on the subject of hope. Someone asked the question what can we do to give young people hope for the future. Some of the panelists discussed epistemological change, paradigm shifts and new meta-narratives, while others wanted to do something to help kids now.

While listening to this discussion between thinkers and doers, philosophers and social innovators, a metaphor for the futurist came to mind; futurist as interpreter.

When I did my undergrad studies years ago, I studied a program in industrial engineering and business management. The logic behind this degree is to produce graduates who can talk to both economists and engineers; who see technology and the economy as a whole, and can communicate with specialists from different areas. In short we would function as interpreters between two disciplines.

I guess the strategic foresight program I finished last year expands this concept, to include not only economists and engineers, but as many disciplines as possible or necessary. But moreover, we futurists act as interpreters not only between ideas and disciplines, but also between worldviews and paradigms.

The futurist may also interpret between realities or levels of layered realities, which my fellow emerging fellow Sandra Geitz, touched on in her last post about Causal Layered Analysis here on the APF blog.

I feel that perhaps the most important interpreter role for my futures work now is the one between the social entrepreneur and the philosopher – in meetings between Schumpeter’s creative destroyers and the metaphorical wise men. The panel discussion at Future Perfect festival that night some weeks ago was an example of such a meeting.

Another example concerning hope for the future and young people will illustrate my thinking and questions around the futurist as interpreter.

While living in Australia in the last five years I’ve learnt more about the very complex issue that is male youth suicide. In this country, suicide is the biggest killer of men between 14 and 44. In fact, 80% of all suicides in Australia are men. My friend Ehon Chan is behind an initiative called Soften the Fck Up, which uses unconventional methods to tackle this issue. Entrepreneurial action, social media campaigning and provocations are used to encourage men to share their feelings and ask for help.

Australian futurist Jennifer Gidley in her article Giving hope back to our young people: creating a new spiritual mythology, finds in her layered investigation that “at the deepest level of analysis, the issue of youth suicide is symptomatic of a cultural malaise at the heart of Western materialist culture.” Gidley quotes Jungian scholar David Tacey who suggests that one of the deep underlying causes of this is that our modern cultures have removed the rites of passage, which helped young people deal with the transformation into adulthood.

I’ve listened to Dr. Tacey emphasize this several times at the Melbourne C.G. Jung society in the old church hall in Canterbury, which they use as their meeting place. And I’ve often thought about the importance of ritual and what new rituals we can create on- and offline to help youth of today.

The depth and the speed

I believe that both the work of Soften the Fck Up and Gidley & Tacey is incredibly important in addressing this issue. And my question is: How do we link these thoughts and actions? The deep thinkers and the rapid doers… Those calling for a new meta-narrative or grand mythology of hope, and the digital natives doing their thing without asking permission… The philosophers/mystics and the social entrepreneurs…

These combined can be a very powerful force for transformative change: The wisdom and the creativity. The depth and the speed, which is required as life is speeding up and problems are becoming messier.

I think we have to join forces with these groups on the edge. Work with both philosophers and social entrepreneurs to learn their language. Find commonalities to try to bring them together in the same spaces or on the same platforms. And then start to interpret.