This morning I found a link to Kevin Kelly’s travel blog in my gmail inbox.

The old founding executive editor of Wired magazine is now on the road, and yesterday – from Leh in India – he posted some thoughts on the problem with travel guide books:

“At least 98% of most guidebooks, even the best ones, will guide you to buildings. Page after page of their listings of “must see” highlights are primarily lists of buildings and monuments. You know, churches, temples, mosques and shrines. The guides act as if you’ve come to see architecture. The rest of most guidebooks point you to eateries and restaurants. So from a guide’s perspective travel is either about buildings or food. Which is true for a lot of folks. But architecture and food is only part of what I’ve come to see.

I’m looking for people. People engaged in whatever they do locally. The problem with people is that they don’t stand still like buildings do. They are not dependably in the same place year after year. They are not always doing interesting things if they are there. You can’t put them in a guidebook.”

But even if I search for those things, I often find other things that are better. And often these are things that I didn’t expect I would find.

And I guess this is the definition of serendipity, a word which is very much on the agenda now in the physical and digital communities to which I belong. Originally from a Persian fairy tale, The Three Princes of Serendip, where three princes were “always making discoveries, by accidents and sagacity, of things which they were not in quest of”, it is now everywhere.

I worked from the collaboration space Impact Hub Melbourne for a couple of years. A community with about 800 members then. Serendipity was one of the key concepts there. Everyone talked about it, but they weren’t just empty words. This really was a place which consciously manufactured serendipity. You never knew who you would meet or what would happen there.

Serendipity exists in abundance on our planet, but is very hard to manufacture within an organisation.

And a challenge I see with new digital services such as Google Maps, geo tagging and peer recommendations, is that these technologies remove serendipity. They make it harder to get lost and encounter something or someone you were not meant to encounter.

Some app developers have tried to bring serendipity back to travel and life (such as the awesome Serendipitor or the Serendipity Machine). This is good, and I think we’ll see more of these apps and add-ons to platforms in the future: Tools, which help make life chaotic and unpredictable for those who need these elements. A bit like Luke Rhineheart’s The Dice Man, where the main character starts making life decisions with a roll of a dice…

Is there any scientific foundation to serendipity? Well, some people believe so. One concept which is related is synchronicity. From Wikipedia:

“Synchronicity is the experience of two or more events as meaningfully related, where they are unlikely to be causally related. The subject sees it as a meaningful coincidence. The concept of synchronicity was first described by Carl Jung, a Swiss psychologist, in the 1920s.”

But what is the link between serendipity and synchronicity then?

Gregory Lent posted a nice thought on that on Quora:

“Synchronicity is the mind’s experience of the interconnectedness of all aspects of reality.

Serendipity is the occasional noticing of that interconnectedness.”

So serendipity is only a small part of the larger phenomenon which is synchronicity. Over the past five years, a few visionary management thinkers have started to do research on serendipity and how to “create it” in organisations. If you’re into this, check out John Hagel sharing his thoughts in this video and Ilkka Kakko’s new book out on how serendipity will lead you to success. Jurriaan Pots’ article Serendipity and why it matters is also worth looking at if you work to create serendipity in organisations. And then there’s of course also the Serendipity Lab in Amsterdam in Holland, which provides tools to unlock “the value of smart, horizontal connections” in organisations.

But what about synchronicity? Where do you look if you want to understand more about that phenomenon?

Here are some of my favourite sources on the subject that I’m slowly working my way through:

1. Balancing Heaven and Earth by Robert A Johnson 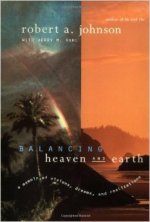 “Recurring physical hardship due to the loss of his leg triggered a second illuminating experience several years later that motivated him to embark on a quest for self-knowledge. Johnson eventually embraced Christian mysticism and became a Jungian analyst. Here, the author of We (and of the companion volumes She and He, as well as seven other books) credits following the “slender threads” of fate for his well-being. Johnson expresses the belief that there is “one, and only one, appropriate action in any given moment of time”; an action that “balances” spiritual needs with more mundane concerns.”

“Jung was intrigued from early in his career with coincidences, especially those surprising juxtapositions that scientific rationality could not adequately explain. He discussed these ideas with Albert Einstein before World War I, but first used the term “synchronicity” in a 1930 lecture, in reference to the unusual psychological insights generated from consulting the I Ching. A long correspondence and friendship with the Nobel Prize-winning physicist Wolfgang Pauli stimulated a final, mature statement of Jung’s thinking on synchronicity, originally published in 1952 and reproduced here. Together with a wealth of historical and contemporary material, this essay describes an astrological experiment Jung conducted to test his theory. Synchronicity reveals the full extent of Jung’s research into a wide range of psychic phenomena.”

3. Synchronicity: Through the Eyes of Science, Myth, and the Trickster by Allan Combs and Mark Holland

“Synchronicity examines the work of Jung and Pauli, as well as noted scientists Werner Heisenberg and David Bohm; identifies the phenomena in ancient and modern mythologies, particularly the Greek legend of Hermes the Trickster; and illustrates it with engaging anecdotes from everyday life and literature.”

4. Synchronicity: The Inner Path of Leadership by Joseph Jaworski

“Jaworski shares the story of his own escape from an inauthentic life and his journey into a world filled with possibility. He maps out the inner path of leadership for those who feel the call to achieve their full potential, using his own life story to teach readers a greater truth. He examines the fundamental shifts of mind that free us to seek out the power of synchronicity. After reading this book, you will discover your own power to help those realities unfold. You will learn to “listen” to realities that want to emerge in this world and acquire the courage to help them be born.”

Jan Cederqvist was one of the founders of Sweden’s most renowned advertising agencies. In this book, which was published in 2006 – only a couple of years before his death –  he shares his life story and the many synchronicities which he acted on and which helped him to a successful life.

So go ahead and get serendipitous in synchronicity with the world. Let me know how you go!

3 thoughts on “Serendipity is the New Black”