Keith Richards of The Rolling Stones is known as a rock’n’roll survivor. Unlike mythologized stars like Janis, Jimi, Jim, Kurt and Amy, who all died young, Keith is still with us. And not only that: He’s had an amazingly eventful and crazy life with several near-death experiences. Over the years, sensationalist music journalists, fans and other close observers have speculated on his self-destruction many times, but surprisingly Keith is still with us. With us on the global stages, touring the world with an old Fender Telecaster and a cheeky grin on his lips.

Sometimes I think of our planet as being a bit like Keith. A survivor that has been through remarkable things: Ice ages, supervolcano eruptions, asteroid impacts and so on. And now it seems like good old Earth is up for another big challenge: The Anthropocene – this era where the clever, fast, ruthless organisms called humans geo-engineer and hack their way into the planet.

So what are some plausible scenarios for us humans on this planet? Well, here are four of them based on some of the eras in the Keith Richards’ life:

The Rolling Stones formed in London in 1962. In the swinging 60s London, there was a naive belief that rhythm & blues and rock & roll could change the world. And it actually did. Keith and his merry band of musicians built on the old American rhythm and blues tradition, and turned it into something of their own. Together with other young mischievous lads like The Beatles and The Who they took the world by storm and global domination ensued.

But long West End nights at places like The Marquee Club were often followed by early morning flights to gigs in other countries. This lifestyle required stimulation beyond natural and legal highs. Amphetamines and other drugs were needed to keep playing and partying.

In the Mischievous Lad future we’ll all keep on playing the game. We’ll keep on churning out hit songs, like there is no tomorrow. We’ll go on never-ending global tours because the show must go on. Just as Keith and his fellow 60s musician friends were fuelled by “uppers”, the planetary citizens in this future will be fuelled by various drugs and medications to keep us going.

In the late 60s and early 70s Keith Richards turned into an enigmatic, globetrotting counter-culture hero. Like other elegantly wasted aristocrats, successful artists and rich debauched heirs, The Rolling Stones set up camp on the French Riviera for the summer. In 1971, Keith reigned like a king in the Stones’ rented villa at Villefranche-sûr-Mer outside of Nice. Here, surrounded by his friends, he waterskied and entertained princes, writers and mannequins by day, drank bourbon and recorded incredible music by night. He could do whatever he wanted to do. However, the British tax authorities, various drug dealers, former girlfriends and others were on his back.

In the Elegantly Wasted future we will have lots of fun, since we will do what we like to do. We won’t have any money or material wealth but we will have lots of friends. The space we inhabit will look very different, where most things are derelict and overgrown with plants and scattered with strange technological gadgets. Essential societal institutions like hospitals and fire departments will still function. Many of us will die on the way to this future but those who survive will thrive.

The elegantly wasted Keith sunk deeper down during the 70s, and in the 80s many counted him out as his severe heroin habit got in the way of his creativity and life. He was rumoured to have replaced all his blood at a special clinic in Switzerland because it was so toxic and could kill him from within (!) He was emaciated, dark and gloomy – a ghostly shell of his former gloriously, elegantly wasted self. The cheeky grin was gone.

Too much excess, wild weather and apocalyptic events make way for the Heroin Casualty future – a scenario, which feels like sleeping on a damp mattress in a dark and gloomy basement. The Heroin Casualty future is a bit like those dystopian zombie futures we’ve seen in the movies, but where the narrator has a constant flu with accompanying phlegmy cough. Our vital infrastructures have collapsed. All is dark and the streets are full of lethal threats and diseases. The global society in the Heroin Casualty scenario is all but resilient, as all systems are out and only the faintest of reserves remain. A virus outbreak could end all life. 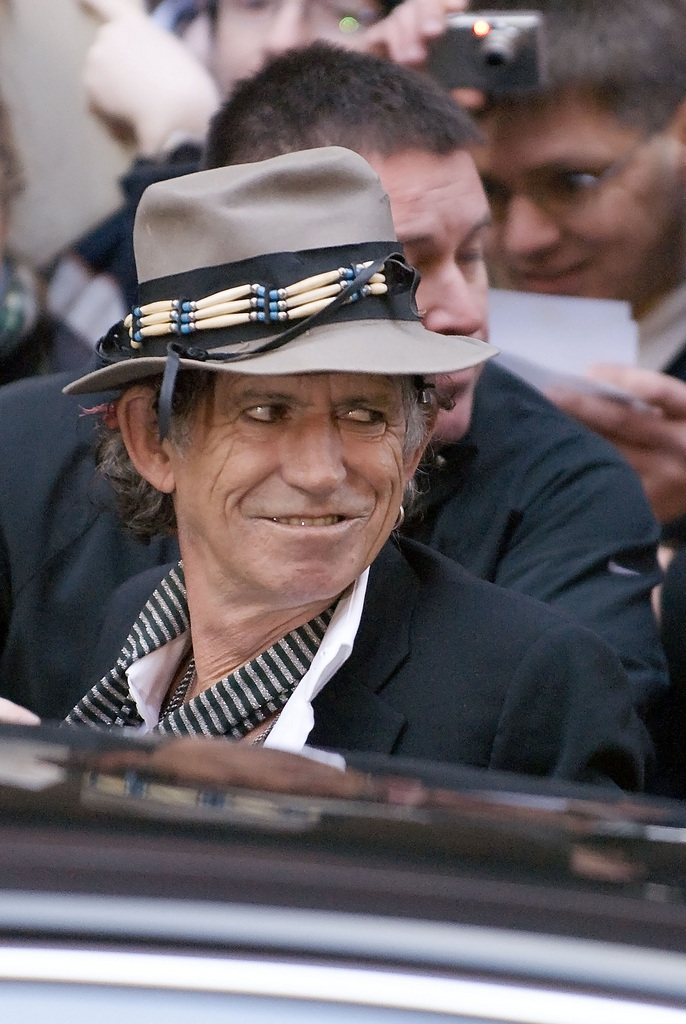 Keith survived the cold, lethal period. And from the 90s and onwards he’s taken on a crazy, colourful and unpredictable character: The role as Captain Jack Sparrow’s dad in the Pirates of the Caribbean films. Johnny Depp, who plays the charismatic captain, is friends with Keith, and when asked if he wanted to star in the sequels, Richards said yes. He had always considered himself a pirate, so why not?

Captain Jack Sparrow’s dad was once the most feared pirate in the world, so is highly respected and feared by all the pirates in the Brethren Court. He was once the Pirate Lord of Madagascar but later resigned to become the Keeper of the Pirate Code, the Pirata Codex, which he keeps with him at Shipwreck Cove.

The Captain Jack Sparrow’s Dad future is similar to the Pirate future, which is propagated by many thinkers and hackers around the world today. A global, transparent future based on direct democracy, where all is open and free, as pioneered by The Pirate Bay and various European pirate parties.

Captain Jack Sparrow’s dad is however different from the regular Pirate future. This future is older, wiser but slightly erratic and nutty. The Captain Jack Sparrow’s dad future has been to hell and back, but on the way it went through a fundamental paradigm shift. It is something of a wise fool with its youthful cheeky grin intact, but with strange beads and braids in the hair.

Keith Richards is still alive and a fifth scenario for the future of humanity will be added to this list when we have identified it. Or as Keith himself puts it:

“I don’t want to see my old friend Lucifer just yet. He’s the guy I’m gonna see, isn’t it? I’m not going to the Other Place, let’s face it.”

With apologies to Jim Dator for (ab)using his four Alternative Futures archetypes.