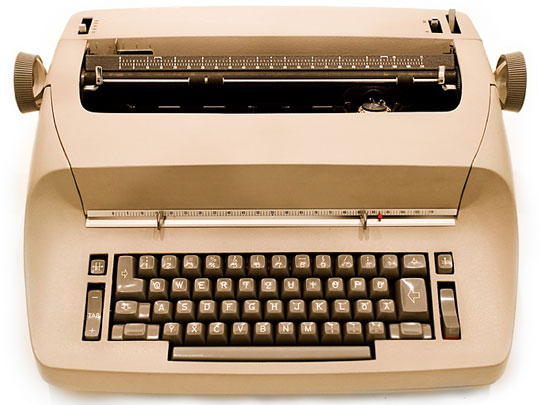 I recently wrote about the current slow death of the institution.

It’s  increasingly obvious that the efficiencies we humans have gained in using institutions (to create scale, while minimizing transaction costs and increasing profits) no longer are relevant. The internet have changed this and institutions are obsolete.

Yes.  As futurist and director of IFTF Marina Gorbis explains in this talk, there is no financial point in us having institutions any more, and therefore (as we live in a world where money decides) institutions will soon disappear.

“You can think of organisations as a technology for creating scale and minimizing cost. This technology is being disrupted.”

They will likely be replaced with online networks, peer-to-peer solutions or other post-organisational structures.

But the centralized institution as we know it will soon be gone.

It’s like the typewriter. Once an important and ubiquitous technology… And now gone…

For years I was a believer in intrapreneurship: To use the principles of entrepreneurship to hack or disrupt large organisations from within, while maintaining the actual system, the organisation.

Today I think of intrapreneurs as a bit like those guys who tried to re-invent the typewriter back in the day.

“Hey, Look! We can add another colour to the pad so that you can type in both black and red now!”

“Look! We have invented an electric typewriter. You don’t need to move the paper down with the scroller thingy, now you just plug the typewriter into the wall and press this button!”

Exactly like people who spend their time managing and trying to change or develop large rganisations today. They think that these organisations will always be around.

Organisations are a technology like any technology, and it is obsolete. The benefits are no longer there.

Sure, there are social and other benefits, but that’s not enough. If it doesn’t make financial sense it will go.

Do you work to make organisations better? As a manager, organisational development expert, change management consultant, intrapreneur or similar?

Be careful. You are likely holding evolution back. You are probably a barrier to progress.

As John Hagel recently pointed out in his excellent 21st Century Global Declaration of Independence:

“We find ourselves now at a crossroads in history. The institutions – commercial, educational, political and civic – that we created in an earlier era in an effort to expand our potential have now become increasingly significant barriers to progress. It is not surprising that our trust in these institutions is plummeting around the world. We see so much opportunity and yet the institutions that are supposed to be helping us are increasingly standing in our way.”