Why is self-reflection so painful?

It started sometime last year when I showed some friends a model of change on a whiteboard in Melbourne. Since then I can’t get it out of my head. Basically it illustrates three roles that change makers can play based on the old s-curves. The transformer works with the dominant paradigm as an advisor, the bridge builder works with both the old and the new, while the radical innovator is focused on the emerging paradigm. 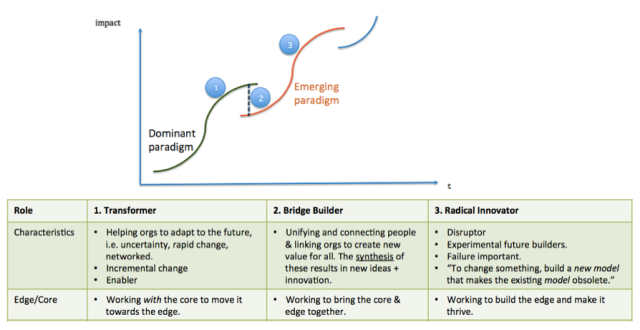 The question I’ve asked myself since that day is: “In which role shall I spend my time and energy?” Some of my friends and mentors have suggested that this change model is a false construct; a real change maker plays all three roles. Like a trickster he can sneak in unnoticed anywhere in this image and act in many ways. I aspire to that, but I’m not there yet.

Instead there’s currently an ongoing discussion in my mind between the transformer, the bridge builder and the radical innovator.

“Listen”, begins the transformer. “All three of us change makers agree that the systems we have in place on planet Earth now aren’t working. Cheap oil is gone soon. Global heating will cause huge problems. The global financial system is on the brink of meltdown. But instead of turning the ship around, those in power argue about how to position the deckchairs on this metaphorical Titanic. We futurists have to get in where the action is and change the ways current leaders are thinking. We have to transform powerful large organisations from within by working with them.”

“The second task, perhaps, is for each individual to make serious and strategic choices as to where his or her life efforts need to be directed. There’s a vast array of options here but personally I would argue against working with any existing entity that was at all responsible for driving and sustaining the current system”. [1]

The radical innovator is fired up and says: “If you think about what that means you can include pretty much all government institutions, universities, large corporations and not-for-profits out there today. And I agree! I have no interest in helping a crumbling system die a comfortable death… Instead we have to do as Bucky Fuller said and build a new model that makes the existing model obsolete.”

The transformer listens patiently and mutters: “The dog may bark but the caravan moves on”

The bridge builder now appears on the scene holding a book with a change model from The Berkana Institute.

“Calm down you two”, she says. “The role of the futurist is to help the old to adapt while helping the new to be born. Now, look here. Meg Wheatley and her colleagues at the Berkana Institute are very wise people and their motto is whatever the problem, community is the answer. Their model of change illustrates how we can hospice the dying system, usher in the alternative system and make clear the choice between the two.” [2]

The radical innovator calms down a bit and objects: “But community building takes time. And we have no time to waste. We must act today! With disruptive innovation!

The bridge builder quietly smiles and disappears into a contemplative state. The transformer has already gone back to perfect his pitch to a Fortune 500 client. The radical innovator continues to work on a start-up idea, which “will change the world”.

This fight amongst my three inner change makers is an ongoing intellectual exercise. About moral philosophy. About practicalities and realities. But what do I feel? Where do I feel energy?

I feel energy when I work with radical innovators, but the intellectual bickering between the three change makers halts me in my steps. Finance is also a hurdle here. But perhaps as more people shift to the new, the more potential there is to make a living here. And the more time and energy I spend to build the new rather than to give life support to the old, the healthier the new becomes, and the sooner the old dies.

Hopefully I will integrate my three change makers into a coherent whole in the future. But today they are often blocking my actions. I have no solution for myself – rather more questions.

Instead of asking myself which of the roles I will play, perhaps I should create a new model for change instead so I don’t have to choose sides?

No, that’s an easy distraction for me, which doesn’t take courage. I think it’s time to make a decision soon and it’s a personal choice as Slaughter points out. [1]

And I think we futurists have to know ourselves really well to make that choice.

A version of this post appeared on the Association of Professional Futurist blog and an extended table of the change maker roles is found here.